How to Make a Whiskey Sour | Cocktail Recipes

Like these Cocktail Recipes !!! Check out the official app http://apple.co/1I00csa

Whiskey sour is a cocktail that does not have the greatest reputation. I think the reason for that is that sour makes people think of sour mix, which is this disgusting, processed fake ingredient. But you really shouldn’t be afraid, because sour is actually just a style of cocktail. Back in the 19th century a sour just meant a drink that had a spirit, citrus and some sugar or simple syrup. That’s really all a whiskey sour is, it’s whiskey, lemon juice and simple syrup.

One of my favorite things about this drink is it’s a great way to still have whiskey, if you really like whiskey in hot weather in the summer, because it’s a really refreshing drink. So we’re going to start with our spirit. Two ounces of rye whiskey, you can also use bourbon. I just love rye whiskey, let’s face it. But this is also a drink that bourbon works great in too.

Now we’ll do equal parts sugar and citrus. Three-quarters of an ounce of simple syrup. Again that’s just one part sugar to one part water dissolved together. Three-quarters of an ounce of fresh-squeezed lemon juice, very important. You know that’s the step that people decided they didn’t want to do, and so instead they created sour mix, which then made people hate the whiskey sour. So this is the most important ingredient in your whiskey sour.

So we’re going to do the egg whites, so just separate the egg white. Here you go. Toss the rest. As always it is very handy to have a trash can nearby to make your life easier. Whenever there’s a raw egg in the drink, we’re going to do something called a dry shake, which means to shake it without ice first to emulsify the egg. Then we’ll shake it again with ice to chill it.

Just a few shakes to do that. You can see it’s nice and frothy. Now we’ll add our ice. Whiskey sour is a drink that you can serve on the rocks or up. I like it on the rocks, especially if you have those really nice ice cube trays that make the big 1 x 1 cubes, which I happen to have on hand. You’ll see the results in a minute.

Just so you can see, that ice cube is perfectly square. That means it won’t melt as fast in the drink. There are only four ice cubes in there, so it won’t water down your drink too fast. Okay, and now it’s time to shake for real. Oh yeah, check this out. See how frothy that is? It gives it a really nice, silky texture. That’s all from the egg white and again, it’s not really going to add anything in the way of flavor.

We’re going to garnish the whiskey sour with an orange and cherry flag. it will really liven things up. See we have a toothpick, you kind of spear it like that and then grab your cherries. One right on top and then sort of get in there, so the top is poking out. And there you have it, so no need to be afraid anymore. That is how you make a classic whiskey sour. 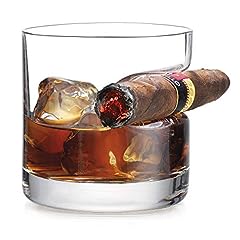 Godinger double old fashioned whiskey glass tumbler and cigar rest in one. Patented round shape makes it easy and comfortable to sip or hold your drink and cigar at the same time. Perfect gift for cigar and whiskey lovers. Handmade Lead Free Crystal ... (as of May 23, 2020 - More infoProduct prices and availability are accurate as of the date/time indicated and are subject to change. Any price and availability information displayed on [relevant Amazon Site(s), as applicable] at the time of purchase will apply to the purchase of this product.) 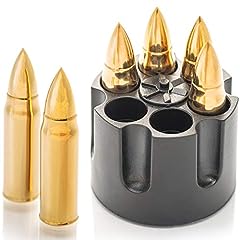 🏆ONE AND ONLY GOLDEN ONES ON THE MARKET - Your Awesome Gold Whiskey Bullets by Amerigo Will Arrive in a Premium and Original Freezer Base That Looks Exactly Like a Revolver, Adding to the Overall Experience and Enabling You Cool Down Your Whiskey Roc... (as of May 23, 2020 - More infoProduct prices and availability are accurate as of the date/time indicated and are subject to change. Any price and availability information displayed on [relevant Amazon Site(s), as applicable] at the time of purchase will apply to the purchase of this product.) 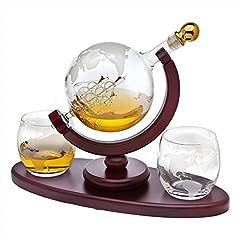 Hand Blown elegant Whiskey Decanter dispenser featuring an etched globe design and antique ship in the bottle will undoubtedly enhance your drinking experience while making a bold impression. PATENT PENDING set includes whisky decanter with 2 matchin... (as of May 23, 2020 - More infoProduct prices and availability are accurate as of the date/time indicated and are subject to change. Any price and availability information displayed on [relevant Amazon Site(s), as applicable] at the time of purchase will apply to the purchase of this product.) 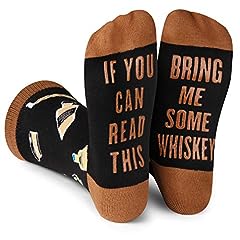 NEAT! LAVLEY WHISKEY SOCKS! - Smooth and luxurious dress style crew socks for the discerning whiskey aficionado. Unisex design fits both men and women. Fits US size 6-13 LONG DAY AT THE OFFICE? KICK UP YOUR FEET! - The bottom of the socks sport a fun... (as of May 23, 2020 - More infoProduct prices and availability are accurate as of the date/time indicated and are subject to change. Any price and availability information displayed on [relevant Amazon Site(s), as applicable] at the time of purchase will apply to the purchase of this product.)

Disliked because he just threw away the egg yolk.

did everything right. that shake tho

good … but why waste that yolk? ,… please don’t waste food!

Could anyone tell me how many ounces that whisky glass he is using ?

This turned out great and all my guests loved the drink. Thanks.

Everything was fine until that goddamn egg white showed up.

Absolutely fantastic,…. I tried this drink with and without the egg white and with the egg white it gave the drink a totally smooth and balancing dynamic. The egg white does not add flavor but it adds balance and evens out the flavors. Top notch cocktail, PLUS it gives you a protein boost as well. The end product is very smooth and very balanced. 2 Thumbs Up and topped with a couple taps of bitters makes this a PERFECT cocktail.

What does people have against a ingrediance like Egg white? Is it because im not from a third world country?

He’s a nerd but I gotta give it to him, he’s gotta shake

I make fresh sour mix at home. It’s just 1 part lemon 1 part lime and 1 part simple syrup, which I also make at home. If you use store bought sour mix that’s no good. But home made sour mix in my opinion is better than lemon juice by itself

I’m so curious to try it! i hope my bar knows how to make a good one

It’s alright to me

If you’re not you better have parents permission before watching this.

What if I add a dash of angusta bitter too ?

Is it better to serve up or on the rocks?

Damn. That shakin’ got me moist.

My next go to drink

What is three quarter of an ounce in ml?

What about the bitters?

what knife are you using to cut the fruit?

I think I’m in love…. What a gorgeous human being!

Please don’t throw away your yolk. Put it in a small container and use it for your next carbonara or scrambled eggs or wherever you’re using eggs and want more richness.

Whiskey Sour is just the best drink ever. And I say that not even as a whiskey drinker. Oh, and the egg white makes the drink. The frothy and creamy texture seals the deal.

You, sir, have to be the classiest, most knowledgeable, and cutest cocktail mixer I’ve seen. Keep up the excellent work.

Meh, no egg whites in mine thank you

That looks like a damn good drink. These are the only Nowcast videos I can watch.

boo please do one with no egg