Margarita – How to Make the Classic Tequila Cockail

Here’s how to make the classic Margarita. It’s the simple combination of Tequila, Cointreau (Triple Sec), Lime Juice and optionally salt that makes up arguably the most popular cocktail in the world.

This iconic drink has a somewhat frustratingly sketchy origin. Several bars and bartenders have claimed to be the drink’s inventor, they all came out of the woodwork in the late 1960’s, after the drink had established itself as a staple of every restaurant and bar and party’s cocktail menu. Bartenders from LA, San Diego, Tijuana, Texas and others stepped forward, declaring that they were Spartacus and like the famous scene from the Kubrick movie, it was hard to tell which on was the real deal.

Most people like to declare that the Margarita was a derivative of the Sidecar (https://youtu.be/5X3XZNGX0GI). And, while it’s plausible that the Brandy was swapped out for Tequila, the lemon swapped for lime and the sugar for salt, it wouldn’t explain how the drink seemed to pop up all over the place around the same time. There are others, like Jim Meehan, who say that it stems from the Picador, which first appeared in print in a London bar book in 1937. There was also the Tequila Sour with the salted rim in the New York Cotton Club book from 1939. Then there was all of the Spartacuses from all over the post-war US, particularly in the border states.

The most likely explanation, and one that David Wondrich seems to subscribe to, is that this Zeitgeist of Margarita invention came about because this combination of spirit, citrus and orange liqueur was a classic—yet nearly forgotten by today’s standards—category of drinks called Daisies. A Daisy started off as a whiskey drink in back in the 1870’s, but later became a template in which to plug in different base-spirits, so you’d swap out the Whiskey for Gin and it would become the Gin Daisy, Brandy for Whiskey would make it the Brandy Daisy, so the combination of Tequila, orange liqueur and citrus would be the Tequila Daisy. This is a tempting theory to believe because the Spanish word for “Daisy” is “Margarita.”

This is the theory that makes most sense to me, but the true origin and the basis for it’s popularity is ultimately something of a mystery. Whatever the story, it’s a classic for a reason. It’s a really great combination of flavors and it’s a real easy sipper.

The drink was of course bastardized in the 1970’s and 1980’s. When it was made with sub-par tequila (mixto tequila), cheap triple sec and a tube of frozen lemon-aide, it’s no wonder people get killer hangovers from them and have to swear off tequila for life.

Make sure to spend the extra couple bucks on quality ingredients. Your head will thank you in the morning. Cointreau is my go-to triple sec and the one the 1937 recipe called for. There are other high-grade triple secs out there, so be sure to use one in this drink.

Along those same lines, you’ll want to use a quality, 100% agave tequila, something with a full-bodied flavor. Some recipes specify Reposado (tequila thats been aged for 2-12 months), but as long as it’s a good, funky, earthy, flavorful tequila, a Blanco or Silver will work wonders in this drink.

This probably does without saying, but don’t mess around with anything other than fresh lime juice for this drink.

Jim Meehan recommends adding a little agave nectar to the drink, but I prefer the classic ingredients. I use a little more Coinreau than lime juice (the 1937 recipe called for equal parts) and I find that that is enough sweetness to offset the sour and strong. But if you need a little more sweet to make the medicine go down, don’t let me stop you.

Technically speaking, the salt rim is optional, but the drink is not the same without it. Maybe I’m just used to it and maybe I’m a sucker for salt, but the drink really seems to cry out for it’s salty rim.

I also prefer the drink up. On the rocks or blended feel like different drinks. This simple combination served up is a beautiful thing, one befitting of the drink’s fame and fortune. Cheers!

Featured in this Episode: 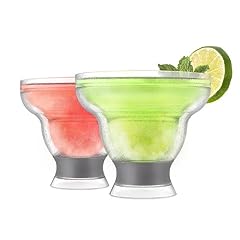 KEEP YOUR FROZEN MARGARITAS FROSTY! - The Host Margarita Freeze cocktail glasses are engineered specifically for frozen cocktails and mixed drinks. Don’t be left with a puddle of margarita mix, keep your slushies and more nice and crisp. These keep y... (as of September 20, 2020 - More infoProduct prices and availability are accurate as of the date/time indicated and are subject to change. Any price and availability information displayed on [relevant Amazon Site(s), as applicable] at the time of purchase will apply to the purchase of this product.) 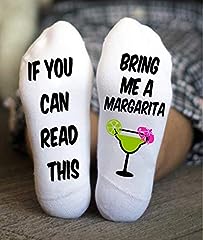 
Margarita Socks If You Can Read This Christmas Birthday Gift

(as of September 20, 2020 - More infoProduct prices and availability are accurate as of the date/time indicated and are subject to change. Any price and availability information displayed on [relevant Amazon Site(s), as applicable] at the time of purchase will apply to the purchase of this product.) 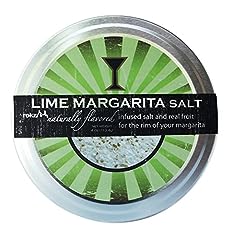 rokz rimmerz combine the finest ingredients— natural, flavor infused fine sea salts with real fruit. Together, they create the perfect accent for the rim of your margarita. For a new twist, dip a lime in the salt and use as a garnish. Margaritas will... (as of September 20, 2020 - More infoProduct prices and availability are accurate as of the date/time indicated and are subject to change. Any price and availability information displayed on [relevant Amazon Site(s), as applicable] at the time of purchase will apply to the purchase of this product.) 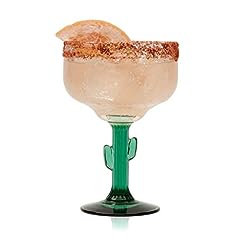 The cactus-shaped stem on these margarita glasses is infused with color, creating a unique look that won’t fade over time Durable glassware design prevents spilling and breaking Includes four 16-ounce margarita glasses (4. 4-Inch diameter x 6. 25-Inc... (as of September 20, 2020 - More infoProduct prices and availability are accurate as of the date/time indicated and are subject to change. Any price and availability information displayed on [relevant Amazon Site(s), as applicable] at the time of purchase will apply to the purchase of this product.)

What’s your opinion on the recipe that calls for tequila, lime juice, and agave syrup?

Thank you for not blending this or adding agave nectar.

The margarita is one of my favourite cocktails but I never order it at a bar. A trick I use is that I rim half the glass with salt. Then I can have a thick rim that I visually appealing but you don’t get a mouth full of salt every time you take a sip.

why did you strain lime juice if you are using double strain after shaking the whole thing anyway?

i’m so damn envious of that voice…

Great video, I love how you give us a little history of the drink. I personally go with .75 Cointreau and .25 blue agave nectar. I lot of my friends also say they like it that way when I make it for them. You should give it a try.

I see a lot of people make the tequila with agave syrup instead of cointreau. What do you think about that? Also thank you so much for all your videos, i enjoy them a lot!

Edit: nevermind, I saw that you answered another comment with this, calling it the Tommy’s Margarita. Again thanks for all your work. Cheers from Denmark

I had to watch again. Another did the Daisy and I knew you had mentioned it. That makes sense the word is used as a template because on YT you see all kinds of Daisy recipes!

Wow 5000 subs! Congrats on your work. Are you doing this alone? If not, congrats to your team too. Awesome since the beginning!

Margarita is my favourite cocktail! Thanks for this DS!

Distinquised spirits, I make my magarita with lazuna 2 oz 100% agave, 1/2 oz gran manier, 1/2 oz agave syrup, 1 oz lime. It has a distinct salty flavor that I love without a rim. Do you think it’s from the blanco tequila? I can’t perceive it from the individual ingredients., thanks for the channel

Sweet Jesus, I love this channel.

Even though it’s simple, a well-made margarita is a thing of beauty. Just like a whiskey sour. And like a whiskey sour, you already like it. It’s a real easy sipper. I’ve been adding a teaspoon of simple syrup to even it out, but I might try going without it.

I just made this and I have to say…delicious

The video is 4.45 minutes, he is wasting most of the time with unnecessary information, when it comes the important part, says very quickly and does not give clear details, please be more clear with your information. please think about it and don’t just criticize me, just because you are the master, we are here to learn. please be more clear.

would you consider it too bastardized to add a t spn-tbl spn(depending on tastes) of agave nectar to the drink?

Is there a recipe in there somewhere?

Margarita is my favourite cocktail! Thanks for this DS!

My god u have very sexy voice make me excited

I need to get back to Texas.

if you need to know how to make a drink fast he’s your guy.

Very good video. Thanks and SALUD !!!

this is a class so STOP the music !!!! it makes hard to concentrate